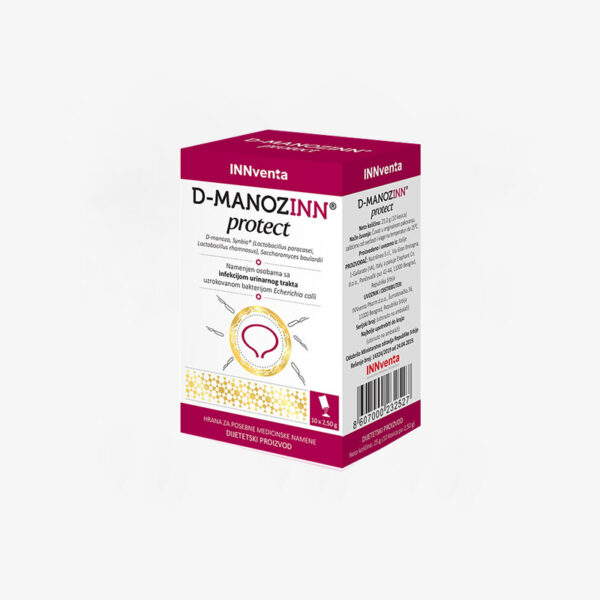 D-MANOZINN® is a unique combination of d-mannose, beneficial bacteria in the protected Synbio® formulation (Lactobacillus rhamnosus, Lactobacillus paracasei) and saccharomycetes (Saccharomyces boulardii). This product has a beneficial effect on the urinary and gastrointestinal tract as well as on the immune system. It represents an efficient supplement to antibiotics in the treatment of urinary infections caused by the bacterium Escherichia coli.

What does the product D-MANOZINN® Protect contains?

How does D-MANOZINN® Protect work?

SYNBIO® – Represents a unique formulation of two Lactobacilus strains – L.  rhamnosus and L. paracasei. These strains are natural inhabitants of digestive tract and vagina. The tests have shown that they bind to mucous membrane with the highest affinity where they form biofilm and have multiple positive effects. By producing lactic acid and hydrogen peroxide, they inhibit bacterial growth and reproduction, and L. rhamnosus has been shown to reduce the production of extensions (fimbriae) through which Escherichia coli is bound to the epithelium of the urinary tract. Probiotic strains stimulate the immune system activity and prevent the occurrence of diarrhoea in antibiotic therapy.

SACCHAROMYCES BOULARDII – A type of yeast that is non-pathogenic and antibiotic resistant. It effectively reduces the pathological strains of Escherichia coli, as it attaches to the bacterium by its adhesive outer sheath preventing thus the bacterium from binding to the urinary tract epithelium. In addition, it has a positive effect on the activation of the patient’s immune system and prevents diarrhoea during antibiotic therapy.

Be the first to review “D-MANOZINN® PROTECT” Cancel reply