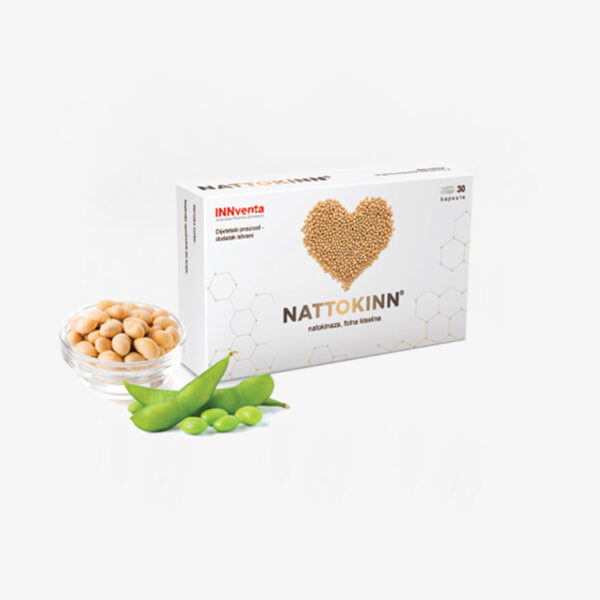 NATTOKINN® is a product with the proteolytic enzyme nattokinase NSK-SD® and folic acid, four times more effective than PLASMIN in melting fibrin.

Fibrin is a protein that forms a network and stabilizes blood clotting. Nattokinase directly dissolves fibrin, breaking it down into smaller molecules. Urokinase is an enzyme normally present in the human body, which converts plasminogen into its active form of plasmin. Further, plasmin melts fibrin, and nattokinase enhances this process by realizing the conversion of prourokinase to urokinase. tPA normally activates plasmogen and converts it to its active form plasmin. Plasmin then disperses the fiber mesh. Nattokinase also activates tPA and intensifies the breakdown of blood clots.

Nattokinase dissolves fibrin, a protein important for stabilization of blood clots. Oral administration of nattokinase in experimentally induced thrombosis led to the degradation of blood clots, with restoration of normal blood flow after only five hours. Afterwards, it was observed that in experimentally induced pulmonary thrombosis in mice, nattokinase stopped the thrombotic proccess by mechanism similar to the mechanism of aspirin. Animal model of carotid thrombosis showed better fibrinolytic effect of nattokinase compared to plasmin. Administration of nattokinase restored 62% of initial blood flow in coronary artery, compared to 15.2% with plasmin administration. Additionally, nattokinase confirmed to be four times potent than plasmin in thrombus dissolution.

In 2008 first randomized trial analyzing the effects of nattokinase on arterial blood pressure in humans was published. This trial enrolled 86 subjects with prehypertension or stadium I hypertension, who received nattokinase (2000 FU once daily) or placebo per os, for eight weeks.

Antihypertensive effect can partially be explained by the inhibition of angiotensin-converting enzyme (ACE). Such mechanism was observed on animal models with administered nattokinase.

Experimental studies, followed by clinical trials in humans, showed that nattokinase reduced the intima-media thickness in carotid artery, along with the reduction in atherosclerotic plaque size. Underlying mechanism of the anti-atherosclerotic effect may be the synergistic fibrinolytic, antithrombotic, and anticoagulant effect of this enzyme. Additionally, nattokinase administration was associated with larger plaque reduction compared to subjects taking simvastatin.

Although experimental studies showed that nattokinase is associated with significant reduction in total cholesterol, LDL-cholesterol and triglycerids, clinical testing in humans pointed to reduction in these parameters, which was statistically non-significant. It is possible that higher doses of nattokinase are required for its hypolipemic effect.

Neuroprotective effect was also registered in the experimental model of acute ischemic stroke. Observed decrease in infarction volume may be interpreted by the effect of nattokinase on vascular smooth muscle cells (myorelaxation and vasodilatation), and also by endothelial protection (via enhanced fibrinolysis and stimulation of endogenous thrombolysis).

Be the first to review “NATTOKINN®” Cancel reply