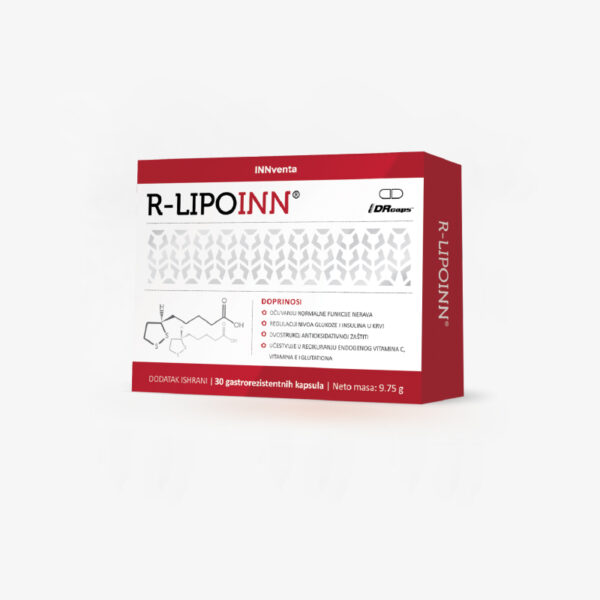 R-LIPOINN® is the only product in our country which contains Sodium R-lipoate which is metabolized in the body in R-alpha-lipoic acid – without synthetic S form which is found in all alpha-lipoic acid based products sold in our market.

R-LIPOINN® improves memory, reduces brain damages and protects the brain from neurodegenerative changes related to aging. R-alpha lipoic acid is synthetized in the body and it is safely metabolized.

Regulates the oxidative stress especially in:

Alpha-lipoic acid is an important cofactor in metabolism of energy of different organisms. Only a small amount is needed for this. Also, when it is present in sufficient quantities, it plays a role of an antioxidant. It is synthetized in the body, but it is also taken in by food. Small quantities of alpha-lipoic acid are found almost in all foodstuffs, mostly in entrails, meat, potato, beet and carrot.

Considering the fact that it contains one asymmetric carbon atom in its molecule, there are two possible stereoisomers of the alpha-lipoic acid form. Naturally biologically active R stereoisomer, while racemate is the product obtained by synthesis, with about 50% of biological activity of natural product because S stereoisomer is biologically inactive.

R-LIPOINN® contains only R form of alpha-lipoic acid, which is active, without S form which is inactive, and thus the bioavailability and therapeutic effect of R-LIPOINN® is 2.5 times higher, which has been proven by numerous clinical studies.

DRcaps™ capsules are made with innovatively formulated hypromellose (HPMC) which is resistant to stomach acid, it is very slowly decomposed and enables intactness of the capsule content during its passing through the stomach.

Be the first to review “R-LIPOINN®” Cancel reply